The Meeker Homestead Museum, named for Forrest Meeker, is a “museum in a house” with various permanent and rotating exhibits.

We invite you to enjoy the exhibits as well as learn about one of the very oldest pioneer homesteads in the county, the Stratford mill town, and the families who lived on this site since 1811.

Enjoy this brief tour of the Meeker Homestead Museum in Delaware County, Ohio. Then, make an appointment to come visit us for a full tour guided by a docent from the Delaware County Historical Society.

This entrance room is part of what we refer to as the 1830s addition. This room is used for educational programs, meetings, scheduled events, and provides space for exhibits.

Families who lived here used this room as a dining room and likely other functions. During the Oberlander years, Garth received visitors here. The reproduction wallpaper was put up in the 1940s and once covered all the walls of this room.

Visitors register at the stand-up desk used in the early 1800s by Moses Byxbe, Delaware’s founder and early treasurer, for collecting taxes

This gallery features rotating exhibits. Refer to separate documentation for information about the current exhibit.

This “blue room” may have been the dining room when the house was built, but since there were only two rooms downstairs in 1823, this room would have sewed multiple functions.

Standing inside the front door, you are in the oldest portion of the house, which was constructed in 1813. The house initially included only two rooms downstairs on either side of you, the basement below, and two upstairs bedrooms and hall. The hall and stairway of this federal style home show that the Meeker family was well-to-do.

Look through the windows and imagine the Meeker property going all the way to the river where there was a grist mill that later became a woolen mill, then a paper mill. At one time there were as many as seven mills in a 10-mile stretch of the Olentangy River, known until 1833 as the Whetstone River. 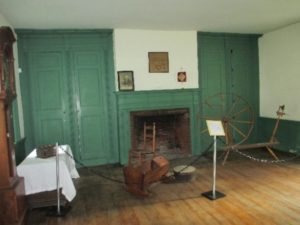 In the early years the “green room” would have had many uses, such as a drawing room for guests or what would be called today a family room. During the days of the underground railroad, Patience Meeker may have spent time here at a spinning wheel, providing plenty of noise to camouflage the sound of fugitive slaves hiding elsewhere in the house.

Forrest Meeker (1769-1849) and Patience Hurlburt Meeker (1771-1843) came to Delaware in 1511 with their children aged 3 to 23. After they left Vermont, they spent time in Chillicothe as well as Bourbon County, Kentucky, but moved north because Kentucky was a slave state.

Forrest Meeker was considered the founding father of Stratford. He purchased 624 acres with a grist mill on the Olentangy River, then known as the Whetstone River, from John Beard. He contracted with the army to supply wheat for troops stationed near Delaware during the war of 1812.  A woolen mill was added in 1829.

Some of the artifacts in the Meeker Drawing Room:

The Garth Room features an early 19005 dentist’s ofﬁce as well as rotating exhibits. Refer to separate documentation for information about the current exhibit.

The 1990s addition is not typically on the museum tour.  This Space once accommodated one-floor living. It is currently used as a bridal party dressing room. Wedding parties who reserve The Barn at Stratford may optionally reserve this space.

Restroom facilities are available when it has not been booked by a wedding party.

The basement is not open for tours.

If you have business with the Society, please return during business hours and use the ofﬁce entrance on the south side of the building. Access is via the Turkey Hill parking lot.

The upstairs landing may have been previously used for family activities such as an open play area, a sewing room or an enclosed nursery. In the 1970s the Porter family added a bathroom. The restroom is available for public use.

This gallery is evolving as we receive additional period donations that belonged to original settlers of the county. Low trundle beds stored under the regular beds would have provided sleeping arrangements for children.

Some of the artifacts include:

Pluggy’s town model, created by Hayes High School students. Pluggy’s Town was located up the hill from where Mingo Park is today.

The American Indian exhibit features a timeline covering 13,000 years. There are displays about the various woodland tribes that inhabited Delaware County.

The exhibit includes a mortar and pestle made from a large tree trunk used for grinding corn; also called a hominy grinder.

Exhibits are gradually being developed in the upstairs three rooms of the back wing which we usually call the 1830s addition. Refer to separate documentation for information about the current exhibit(s).

In the back hallway, take a peek inside the door to the attic, referred to in pioneer days as the garret. Note the onion on one of the steps. When we give tours about the underground railroad, we mention that fugitives would rub onion juice on the bottom of their feet so that dogs would not detect the smell of humans who were hiding in the attic.

The back stairway from the second ﬂoor to the ﬁrst ﬂoor is not available for use.

Nicholas Gilman was awarded 4,000 acres for military service in 1800 by President John Adams.

John Beard purchased 624 acres from Benjamin Gilman in 1807 and sold them to Forrest Meeker in 1811.

George Bieber bought approximately 500 acres from Forrest Meeker in 1845. The property was gradually subdivided. Various members of the Bieber family lived on Stratford Road into the 1940s.

Hours of O: By Reservation Only

Help us continue to improve the Meeker Homestead Museum. Although we do not require an admission fee, we suggest a $5 donation to help us support our museum, furnishings and exhibits.